From Heroes of Newerth Wiki
(Redirected from Midwars)
Jump to: navigation, search 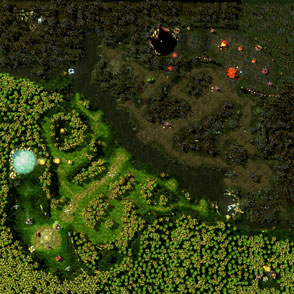 Towers are located along the lane, and within the base alongside each of the barracks. They are very sturdy defensive structures that deal a lot of damage early on. The two in lane must be destroyed before advancing to the enemies base. The Backdoor Protection System doesn't apply to towers.

These structures are found deep in the base and are useful in aiding the push to destroy your enemies shrine. Destroying a barracks will significantly increase the strength of your team's lane creeps. There is a single pair of barracks (ranged and melee) per side. The Backdoor Protection System doesn't apply to barracks.

Neutrals are found dormant in the forest. They yield gold and experience like other creeps but can be more dangerous than your average lane creeps.

Fountains provide a safe haven to replenish life and mana without cost and resurrects your hero on death. Enemies that approach your team's fountain will be attacked. The fountain is also home to shopkeepers that allow you to spend gold to purchase powerful items.

Powerful runes will spawn at one random location every 2 minutes. These runes provide benefits to the player like double damage or invisibility. On Forest's of Caldavar, there are spawnpoints are located in the middle of both rivers.

Transmutanstein is found in the bottom river near the middle of the map. He is very dangerous and requires a large amount of items and team effort to kill. Slaying Zorgath will drop two Runes of Power, which provides all rune effects (except Refreshment) at the same time, and Transmutanstein will drop a

Token of Sight - an item that provides Clearvision and True Sight and is lost on death. Zorgath and Transmutanstein have 4 minutes respawn times.